Demonstrators have gathered in cities across Aotearoa this week in support of Iranian women.

The death of Mahsa Amini, a 22-year-old Kurdish woman, has brought an eruption of protests in many cities across Iran, including its capital, Tehran.

Authorities claim Amini died of heart failure after she was taken into custody by the so-called morality police to be 'educated' for allegedly breaching the country's strict modesty laws that require women to wear a hijab.

However, her family believes she was beaten and tortured before falling into a three-day coma and eventually succumbing to her injuries.

Iran Human Rights has since recorded 76 protester deaths across 14 provinces, including six women and four children. But the actual death toll is likely higher as internet restrictions in the country may be causing a delay in reporting.

Founder of Iranian Women in New Zealand, Dr Forough Amin, told 95bFM's The Wire that Iran has not seen protests this widespread since Bloody November in 2019.

The protests over a significant overnight rise in fuel prices were considered to be the most violent political unrest in the country since the rise of the Islamic Republic in 1979.

Amin said the Iranian government has blocked several social media platforms in an effort to stop protest information from spreading and as a "cover to carry out their savagery".

In 2019, Amin said 300 people were killed in three days while the internet was shut down.

"It can emotionally impact the protestors because the regime can crush the protest in one area and make everyone go home, where they have no access to the internet. That's the strategy they have been using."

According to Amin, the morality police has created a country of ultra-conservatorship and "no one is happy" with their presence.

Recounting a personal experience being arrested by the morality police, she said the encounter was "terrifying and traumatising".

She believes younger generations of Iranians have changing attitudes towards women's issues and that the government is threatened by this.

"Men are increasingly more visible on protest frontlines and these protests are becoming a bigger Iranian movement for Democracy."

When asked if enough international effort is being made to support women in Iran, Amin said more needs to be done.

Though individuals like Golriz Ghahraman have shown their support in Aotearoa, Amin said solidarity is yet to be seen from our government.

"Practical actions like sending resources and talking to Iranian ambassadors are much needed. A democratic, feminist country like New Zealand needs to take more initiative." 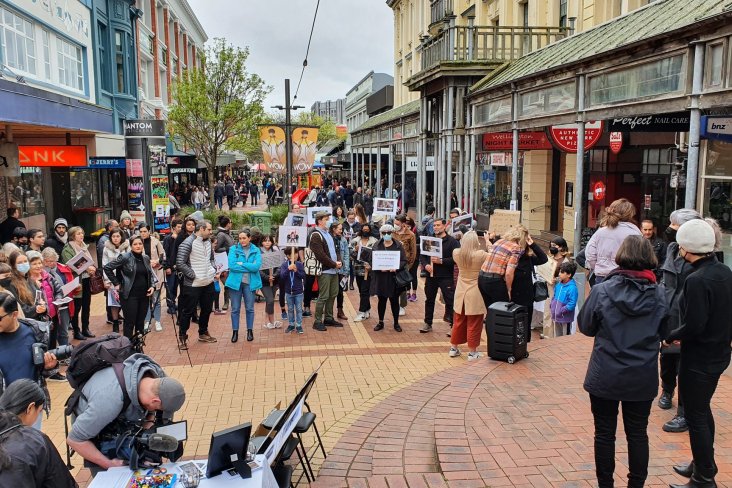