The University's Business School invited the CEO of Z Energy owned by Australian oil giant Ampol, to give a presentation about "transitioning to a low carbon future."

Around 30 protesters rose from their seats in the lecture hall, and delivered a passionate chant accusing the CEO of greenwashing and calling him a "climate criminal."

Some members of the audience told the activists to "grow up" and "shut up" with one audience member singing "So Long, Farewell" from The Sound of Music.

Protesters including University of Auckland students left the lecture hall singing the historic activist song “Which side are you on?” after being ordered to leave the University by event organisers.

A few members of Extinction Rebellion stormed the stage to display a large banner that said "just stop oil" and continued protesting for the duration of the lecture.

Protest spokesperson Adam Currie criticised the University for giving a platform to one of New Zealand’s biggest carbon producers.

“The University tells us to be the critic and conscience of society, yet students are being expelled from University premises for doing exactly that."

"Z’s business model is fundamentally steeped in climate-killing oil, and events like this legitimise climate criminality and provide the social license to operate that fossil fuel corporations are desperate for."

Z Energy is the second worst climate polluter in New Zealand. According to the Environmental Protection Authority, Z Energy reported 7,498,612 tonnes of CO2-equivalent emissions between July 1, 2020 and June 30, 2021. 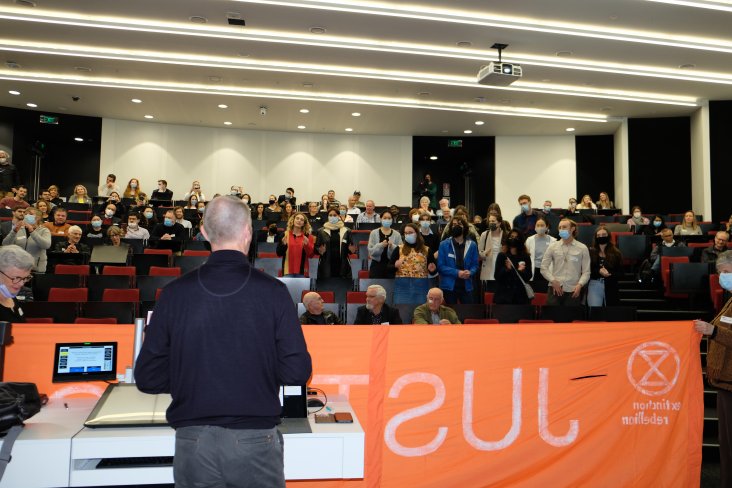