Tertiary Education Union members at Waipapa Taumata Rau, The University of Auckland have implemented a four day ban on entering and releasing student marks this week, as part of their strike action for a pay rise, in line with inflation and the rising cost of living.

Students will not receive any final grades from 7pm Monday 15 November, until 7pm on Friday 18 November.

The Union says they understand that these actions will cause inconvenience to students, but that they have been forced into this by an employer that refuses to listen to staff repeatedly saying they are past breaking point.

Currently, the University's best offer is contingent on removing important conditions such as retirement leave and does not match rising inflation.

95bFM spoke to union members, who rallied outside the University of Auckland ClockTower on Princes Street at noon yesterday.

Tertiary Education Union member Nicole Willis told 95bFM that in a session with the employer, UoA claimed that “because most of our casual staff are students, they do not need a living wage.”

Union members were “very disappointed” with this response, with Noel Zeng, a bargaining representative for professional staff, saying they “want Vice Chancellor Dawn Freshwater to do better, and come back with a better deal- otherwise, this is a stain on her reputation.”

Another bargaining representative, Andy Faye, called the retort “embarrassing” and “disgusting”, citing the fact that being a student, in some roles within the organisation, is sought out and advantageous for the position.

“Everybody who works deserves to have dignity and participation in society. Students should not be exempt from that.”

Paul Taillon, a lecturer in the Faculty of Arts, told 95bFM that as part of negotiations, the employer has proposed removing parental leave from any future employees that are yet to be hired.

Taillon maintained that union members were “not prepared to do that.”

Staff were adamant withholding marks from students was not a reflection of their relationship to students, but rather a “demonstration to the University, about the anger of their staff,” in the words of Professor Andrew Joel, from UoA’s school of nursing.

When asked about what message the students should take from the strike action, Dr Sara Buttsworth said “staff are doing this not to punish them, but as an attempt to get a message across. They (the students) need to be thinking about the people that take their fees, as opposed to the people that are teaching them.” 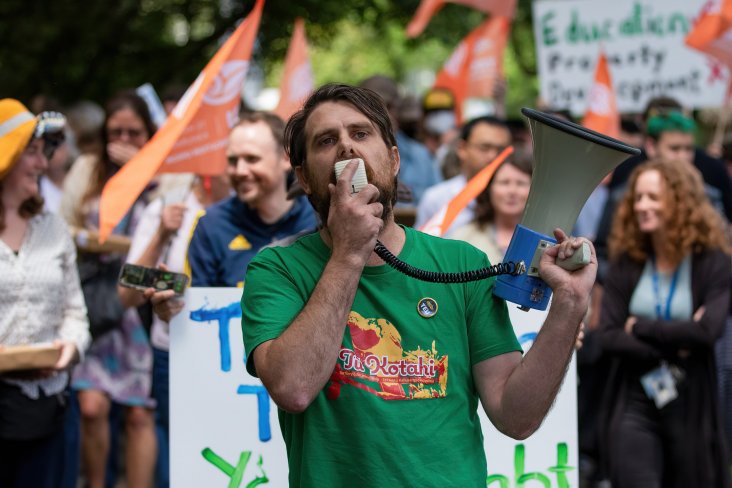