Swarbrick wrote an open letter in 2021 calling for the government to match the $15 million commitment proposed by the Auckland Council to restore the building.

The St James was built in 1928 and is classified as a category one heritage building, meaning that the theatre is of special or outstanding historical or cultural significance or value.

In 2007, a fire damaged the theatre, and in 2015, it lost funding for restoration, leaving the iconic venue deserted for several years.

Earlier this year, footage was released of vandals ruining the venue.

Bielby says the vandals stripped the electrical cabling out of the building, cut off the mains, stole all of the copper water pipes and gutters, and damaged the roof, causing "waterfalls" throughout the theatre due to lousy weather.

Swarbrick says revitalising the St James would restore life into the midtown part of Queen Street.

“To lose the St James would be to lose an incredible opportunity for an effectively brand new, awesome, mid-to-larger sized venue, but also to lose some of our heritage.”

Swarbrick argues recycling the current theatre would be more economically beneficial than building a new theatre, noting that the Civic Theatre restoration in 1994 was able to finish, despite the Civic being in much worse shape than the St James is currently.

A petition has been launched this week by the St James theatre calling for the Arts, Culture, and Heritage Minister, Hon Kiritapu Allan, to support rebuilding the theatre. 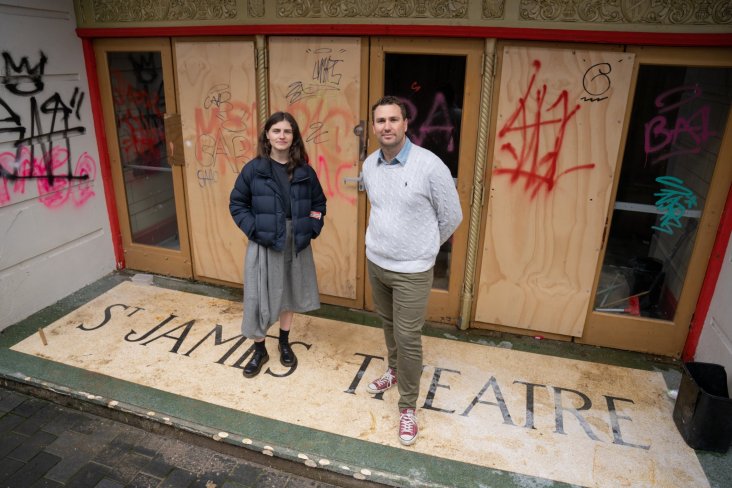